Wait, Radioactive Toothpaste Was a Thing?

Posted on January 5, 2022 at 1:51 pm by mysocialpractice
Categories: Dental Tips 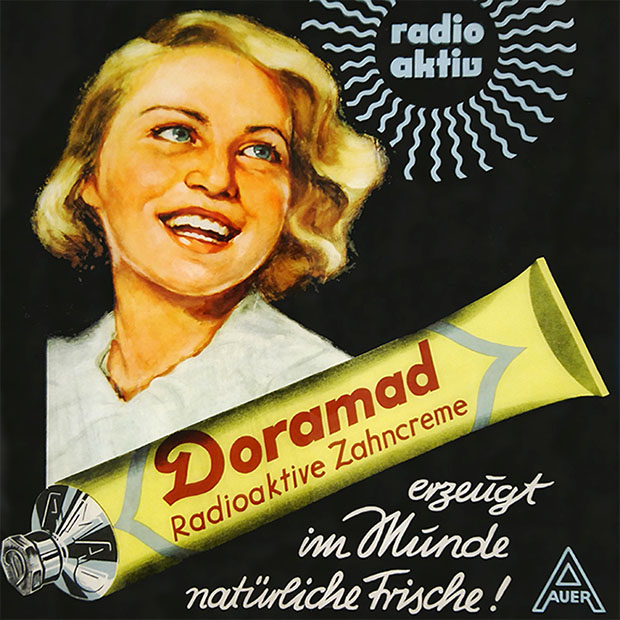 Radiation and the harm it can do to humans wasn’t well understood in the early years after it was discovered.

There were all kinds of exciting radioactive products for the public to buy, from radioactive water jugs to children’s toys to butter to…toothpaste.

A hundred years ago, the German company Auergesellschaft produced Doramad, a toothpaste with thorium as the (radio)active ingredient. Doramad was advertised as being great for fighting gum disease and polishing enamel. Meanwhile, in Paris, a radioactive cosmetics line called Tho-Radia included toothpaste.

Tubes of Doramad had some bold (and false) claims on their labels: “Its radioactive radiation increases the defenses of teeth and gums. The cells are loaded with new life energy, the bacteria are hindered in their destroying effect.” This was flagrant false advertising, and thankfully the radioactive toothpaste craze didn’t last long.

The Saga Continued With a WWII Caper

These kinds of fraudulent health and cosmetics companies were probably the reason behind an odd series of events that happened in WWII. While the Manhattan Project was underway in the US, a team of spies was tasked to discover how far the Nazis were getting with developing nuclear technology. What they found instead was a radioactive scam.

The Alsos Mission was an international operation of scientific, intelligence, and military officials established in 1943. Colonel Boris Pash and his men seized scientists, scientific data, and atomic materials as they followed on the heels of the advancing Allied forces, and they discovered someone was collecting radioactive materials like uranium and a stockpile of thorium smuggled from Paris to Germany by the Auer company.

The Alsos team was obsessed with solving the mystery of that thorium stockpile. In what first seemed like a huge success for the mission, they eventually tracked it down — only to discover that it was being kept in preparation for the end of the war, after which the Auer company planned to get rich making toothpaste out of it. That’s how the mission got its sarcastic nickname “Operation Toothpaste.”

Two decades earlier in the United States, a dentist, Joseph Knef, traced the pattern of severe tooth and jaw problems in local young women back to their place of employment: the US Radium plant, where they all used radioactive paint. The reason it was causing such awful dental problems is that the women would lick their brushes to keep the bristles straight, putting the paint in direct contact with their teeth and gums.

Follow the Dentist’s Advice and Steer Clear of Fads

Thankfully nothing so dangerous as radioactive materials has become a popular dental fad in modern times, but it’s still a good idea to avoid getting dental health advice from unofficial sources. If you’re looking for a good toothpaste for you, just ask the dentist!

Do you know of any wild old-fashioned dental health products?